Our heritage and culture make us what we are and is to be seen all around us; from our castles, forts and historic buildings to our Irish language, our music and dance to the distinctively Irish way we live.

Sitting in the heart of the National Park, and within five minutes of Friars Glen, Muckross House has been drawing visitors for many years, the most prestigious being Queen Victoria in 1861.

Designed by William Burn, a Scottish architect, Muckross House was built for Henry Arthur Herbert and his wife, the water-colourist Mary Balfour Herbert. This was the fourth house that successive generations of the Herbert family had occupied at Muckross. Building commenced in 1839 and was completed in 1843.

Today, you can tour the house and its elegant furnishings and explore the basement where the many servants worked to keep the busy house running smoothly.

Adjacent to Muckross House, and in stark contrast from a cultural point of view, Muckross Traditional Farms represents a very different Ireland – rural Kerry in the 1930s and 1940s, when a trip to the well was still a daily chore and electricity had yet to be introduced to the countryside.

See the men work the farms and the ‘bean an tí’ make butter and keep the house in the same way and using the same tools as they did back then. The farms are complete with cattle, horses, pigs, hen and geese to mention a few!

Again, a short way from Friars Glen, is Muckross Abbey. Founded in 1448 for the Observantine Franciscans by Donal McCarthy Mór, the abbey is now in ruins, but remarkably well preserved. Attacked by Cromwellian forces under Lord Ludlow in 1652, many of the monks were murdered.

In the 17th and 18th centuries, the Abbey became the burial place of the three Gaelic poets: Aodhagan O’Rathaille, Geoffrey O’Donoghue and Eoghan Rua O’Suilleabháin.

Today, visitors can get a strong sense of what it was like to live here. The centrepiece of the Abbey is an ancient Yew tree, located on the middle of a cloistered courtyard and is said to be as old as the Abbey itself.

Killarney House, originally the home of the Earl of Kenmare has been extensively restored and how houses a permanent exhibition showcasing various aspects of Killarney National Park and is well worth a visit. The present building was originally the stable block of the main house, a French-style residence built by Valentine Browne in the mis 1720s.

Located on the shore of Loch Léin (Lake of Learning), Killarney’s Lower Lake, Ross Castle was built by O’Donoghue Mór in the 15th century.

This was was one of the last fortified castles in Ireland to fall to Cromwellian forces in 1652. Legend has it that O’Donoghue Mór can be seen galloping along the shore of Loch Léin every seventh year, and should you see him, you’ll be bestowed with good luck for the rest of your life… so keep your eyes open!

Find Us in Killarney 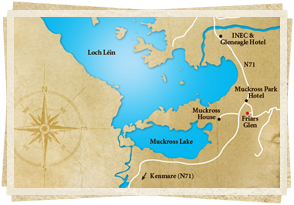 “Extremely clean! Extremely friendly! Friars Glen sits back away from any busy roads so it was very quiet and the view from the breakfast room was stunning. Bridget put together an excellent breakfast along with fresh brewed coffee and tea. There are several trails nearby for hiking. The inn was full but you would never no it because the room was very quiet. Wish we had planned to stay longer, but next time we will!”

This website uses cookies to improve your experience while you navigate through the website. Out of these, the cookies that are categorized as necessary are stored on your browser as they are essential for the working of basic functionalities of the website. We also use third-party cookies that help us analyze and understand how you use this website. These cookies will be stored in your browser only with your consent. You also have the option to opt-out of these cookies. But opting out of some of these cookies may affect your browsing experience.
Necessary Always Enabled
Necessary cookies are absolutely essential for the website to function properly. This category only includes cookies that ensures basic functionalities and security features of the website. These cookies do not store any personal information.
Non-necessary
Any cookies that may not be particularly necessary for the website to function and is used specifically to collect user personal data via analytics, ads, other embedded contents are termed as non-necessary cookies. It is mandatory to procure user consent prior to running these cookies on your website.
SAVE & ACCEPT